Been a while now, hasn't it?

I started the whole Free-Write Wednesdays idea so that I could outrun my inner critic at least once a week and make something - anything. The past few months, the inner critic has [quite evidently] won. But miracles and disasters have a way of shutting her up... 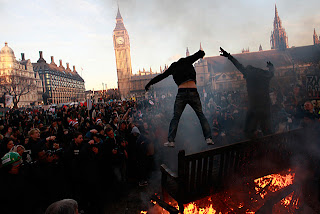 Public disaster and private miracle have conspired to wake me up before sunrise and have compelled me to pound away at my laptop...

You already know it,
when you call them 'greedy'
that this 'greed' is your greed
(the army of your nightmares!)
that spares nothing, cares for nothing, consumes
everything
you have given them billboards for hearts
you have sold their futures for figures
you priced them out of everything
even their own education
but they are wily though
(the army of your immorality!)
you call them wily
but as you say it
you know it is the exact flavour of your own trickiness
robbing with one hand while you distract
with the other
from every pocket, from every continent

spreading the pain, preserving your wealth
they are 'without conscience', 'careless vandals'
'careless arsonists', lit petrol bombs, big-chested in the firelight
(the army of your callousness!)
'mindless' like mindless made-up money
bombs like your bombs, 'empty' like you are empty