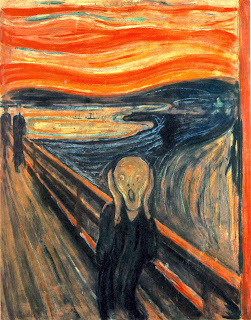 the scream. edvard munch
It's 23.17. It feels later. It feels like everything and everyone everywhere is asleep.
Isaiah is in his cosy, childish dreams.My feet are cold. I still have my jacket and scarf on, and I've been back home for over two hours. I've made my tea too sweet. I think it was a subconscious effort to mother myself. I should be writing some book, but instead I'm doing this. I think perhaps it's the best thing though, because I've gotten into this weird place lately. I have this thing, you know, that I do every week on facebook? Free-write wednesdays? Well I've missed it a couple of weeks, and I've not read anyone elses either. I've not read anything at all. It's like I'm trying desperately to keep still, and I don't know why. It's like I'm a predator waiting in the bushes for the right time to pounce. I have a predator's vulnerability, the last thing we generally think about in predators. I am all hunger and exhaustion, and my muscles ache from stillness. I don't know what I'm waiting for. I'm writing every day, but most of it doesn't feel useful. The parts that do seem useful are like a painfully beautiful glimpse of something, a fast fish under water, silvery then out of sight. I'm feeling something, yes. I'm feeling something.I can't reach myself though. I'm listening to a poem in a foreign language. The rhythm is beautiful. Oh but does it say..... eh?I tire myself like this. I'm not fit for public consumption. My facebook mostly falls silent as I scroll glumly through the events of others lives, smiling weakly sometimes, laughing, but feeling outside of it all. It's all so fun. I have nothing to add.Who wants to hear about this crap all the time?The loneliness. The work is bloody lonely. I barely understand what I'm trying to make, much less anyone else. I'm jealous of everything outside of myself, just because it's outside of myself.It feels like I'm shooting past a book, like the book is actually on the way somewhere. Home? I don't know. It's the work, the actual intricate work of the thing that feels like a form of praise.(Goodness, I am such a Catholic. I really am. (I originally went to write "God, I am such a Catholic". Lol. Wow. You can take the girl out of the church...))I wrote on FB and twitter, cause you should stay current with these things, even if you feel all weird and pale in your guts, I wrote: [phone-call interruption - talk about that later] "as I grow up, I realise that so much in writing is about learning to live with tension and silence. All day I try to create peace and then when it arrives in my living room, full of promise, I start to splutter and choke as it closes over my head, swimming madly for noise." And then I felt a little embarrased because the next post on my twitter timeline was from a musician, some shadow-less exclamation about what he was doing, and I thought - THAT'S what twitters for! Not the endless silly musings and meanderings.I texted that same post to a comrade scribbler of mine, about the silence and the drowning, and he rang me (surprise! He's been MISSING lately) and he said, yeah! he said, it's exactly that tension and silence he saidremember that system I had of writing for 45 minute segments? well, I've not been able to stay silent for 20 minute segments not even 10 minutes I can't - he sighs I tell ya. It's ridiculous. And I replied, it's ironic because the more important the work is the harder it gets sometimes because it matters so much you just fucking chokeand then he started talking about his hair and it made me laugh how he dropped it inlike it was an existential tragedy akin to the solitude of manAnd my hair! he said. I'm really worried about my hair! Its dreading into one big fucking dreadlock! And on and on we went talking about hair maintenance and matting and locking anddetangling with glycerine and water and I said why don't you come round and I'll sort it outand I'll give you some money andnah I can't take money andso and so forth and I just kept laughing at us, building this ridiculous conversationon the jagged bones of that empathy we share about lonelinessand silence, all full of laughter now,so obvious what we're doingswimming for noise!but -ha! - sometimes noise is the only way to live with the silence andha! 'Vanity is my favourite sin'(spot the reference!);-)I think my self-pity is all spent for the evening. I think it's back to work now for the 52 seconds I have left awake.[Gemma + silence exeunt]
Posted by Unknown at 11:37 pm