Don't Be Drunk, Be Sober

My mate called me from London - I'm in Saint Lucia at the Mo, visiting fam and soaking sun - and asked me about the G20 riots. And I said, why? Whats been happening? Has it been really bad? I told her that I'd been watching American news over here and that I wasn't really that up on anything British, but that they did mention it. She said, I don't really know. I haven't been watching much news either. I don't watch the news. I thought that was an interesting thing for her to say because it resonated with me, I too have caught a heavy case of the indifference. Information overload??
I asked her about Obama... has everyone been trying to meet him now he's over there? She told me about a friend of hers - did I know her? She said the name. I said no - who works on OK magazine who'd met him and who was going to post pics of her and him on Facebook. It did a strange thing to my mind. I think we said some other things to relating to Obama, but I can't remember what... nevertheless I came round to saying what I've long thought about him. I said that he is, indubitably, a wonderful symbol, a wonderful living symbol of hope and of change, but that the universal adulation of him (and on the flipside, villification, but it's almost the same thing - dehumanization) makes me uncomfortable. He's still a politician, I said. Lets see what he does.
We've all been waiting for something like Obama. We've all been pretty dried up and cynical. We don't believe anything. We don't believe in politics because its become obvious that our voice seems to be drowned out by the great, inorganic screeching of the 'spin' machine. We don't watch the news because its saturated with relentless death and horror and because we no longer believe it's impartial. Before the great crash, we couldn't afford houses because they were too expensive and now we can't because jobs are uncertain and no one will lend us money to buy the - finally - cheaper houses. And the crash was based on nothing real. Just ideas about the value of things -thats all. Everything we believed and depended on has been exposed as a sham and completely arbitrary. We were ripe for Obama. Something post-cynicism, post-indifference, post-exhaustion and he came, joking that, "Contrary to the rumors you’ve heard, I was not born in a manger. I was actually born on Krypton and sent here by my father, Jor-el, to save the Planet Earth..." Not a joke though really. We were hoping beyond hope to be saved from ourselves, from our flabby, fed-up minds and technology addiction and powerlessness. And we got Obama! And how exciting it was for everyone, even the right-wing extremists who once again had someone to really hate! 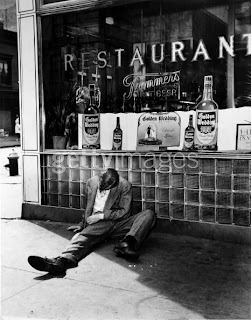 But I said to my friend, we've got to be careful. He's a politician. All I'm saying is, don't be drunk. Be sober. She said, yeah, I like that. You should put it on a t-shirt. And I got round to thinking about how it applies in so many ways right now, in my life, my career, my (almost non)love life. Its not the age for swooning, for tricking myself under the nearest spell, but for keeping my heart steady, and loving with my eyes open. No conspiracy theories, no elaborate projections of doom, but just careful, balanced appraisal of my situation and kind treatment of my wounds.
That thought made me feel a certain level of peace, made me feel around the same age as culture, as Right Now. As though society, too, were a single working mother of thirty, trying to make sense of her scars, still young enough to crave a clear, pure moment; older, sadder, wiser, and desperate for the truth of herself.
Don't be drunk, be sober... hmmm. Metaphorical of course. I do like a nice Mojito now and again.
Peas,
xxx